Clearing a Path to Success Through Kalimantan Swamps 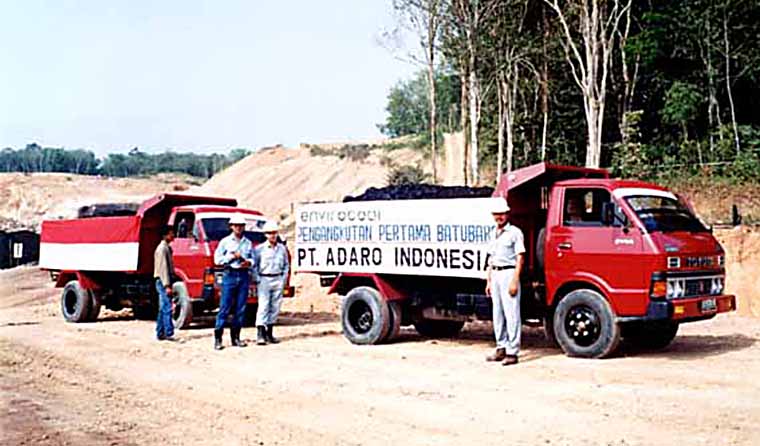 The early days: The very first shipment of Envirocoal leaves Adaro Indonesia’s mine site in South Kalimantan in 1991.

Adaro’s history begins with the global oil shocks of the 1970s. They caused the Indonesian Government to revise its energy policy, until then focused on oil and gas, to include coal as a fuel for domestic use.
With this increased focus on coal, in 1976 the Mines Department divided East and South Kalimantan into eight coal blocks and invited tenders for these blocks.
Spanish Government company Enadimsa bid for Block 8 in the Tanjung district of South Kalimantan, as coal was known to be present in the district from outcrops mapped by Dutch geologists in the 1930s and from intersections at depth in oil wells drilled by Pertamina in the 1960s.
No other company bid for this block; at that time it was regarded as being too far inland and the coal of low quality.

Why ‘Adaro’?
The name ‘Adaro’ was chosen as the company name by Enadimsa to honor the famous Adaro family, which had been involved in Spanish mining for several centuries, and PT Adaro Indonesia came into existence.
Adaro Indonesia’s Coal Cooperation Agreement (CCA) was signed on Nov. 2, 1982. Enadimsa conducted exploration work in the agreement area from 1983 to 1989, when a consortium of Australian and Indonesian companies purchased 80% of Adaro Indonesia from Enadimsa.
During the first half of 1990 a feasibility study was carried to lay the groundwork for project development. Of key importance was selecting a transport route for coal haulage, and the decision was made to build an 80km coal haul road west to the Barito river, rather than a 130km road east to Adang Bay on the Kalimantan coast because it would be quicker and cheaper, especially as it would avoid traversing the Meratus mountains.
It was also decided to start production from the Paringin deposit as it had a slightly higher heat value than the Tutupan deposit and also because it had overburden that contained a burnt mudstone, a harder rock suitable in road construction. This mine development was fast-tracked in order to get the coal to the market as quickly as possible to develop a customer base.
Decisions were made to integrate with the community as much as possible, with all staff, expatriate or national, living in the local towns, and a recruitment focus on hiring from the local population with the attendant commitment to major training programs. Use of contractors to the maximum extent possible was also made a focus for the operations, particularly local contractors and local suppliers if available.
The first step in development of the coal deposit was to raise funds, and in May 1990 a number of banks were approached for project finance of US$28 million. However, all of the banks declined to provide funds on the grounds of perceived issues that related to the quality of the coal because Adaro’s type of sub-bituminous coal had not been traded internationally before in any significant volumes and because the domestic market was relatively small.
There were also doubts about the feasibility of the haul road construction primarily due to the fact the last 27 kilometers of the proposed road was through swamps which even if technically feasible, would mean a high cost of construction.
Banks were reluctant to fund the project over worries about the coal quality: Adaro’s type of sub-bituminous coal had not been traded internationally before. So the shareholders put up US$20 million development funds at commercial financial rates for the construction and development of Adaro’s operation with the requirement that any further funding come from cashflow.

Mining Begins
Construction of the coal haul road started in September 1990 and took about a year due to difficulties laying road over 27km of swampland at the Barito river end. Construction of a two-million tonne per year crushing, stockpiling and barge loading system at Kelanis on the river began in March 1991.
Opening up of the Paringin pit with its single 30 meter thick seam started in March 1991 using local contractors, and the first coal was tested in stockpile conditions and was sent to Australia for combustion testing; the results came back with positive indications for its use in commercial boilers, and an official opening of the Paringin mine was held in August 1991.
During 1990 a marketing program had been developed that focused on potential markets where Adaro’s ultra-low sulphur and ash coal would have benefit. To aid marketing it was decided to adopt a brand name for the coal that would reflect these qualities and after the merits of “aquacoal” had been discussed and rejected, the name “envirocoal” was selected.
The first sale of Adaro’s coal was to Krupp Industries of Germany who were interested in its environmental qualities. The company’s vessel, MV Maersk Tanjong, self-loaded with its own gear and grabs and sailed to Europe on October 22nd with 68,750 tonnes of Envirocal.
After further coal testing, shipments were made in 1992 to a range of potential customers and with the completion of construction of the mine and infrastructure and the establishment of a customer base, Adaro was declared to be in commercial production on October 22, 1992.
Since those early days, the Tabalong mine has grown to be the southern hemisphere’s largest single-mine site, and production has grown from an initial 1 million tonnes in 1992, with some years recording extraordinary growth. In 2006, for example, Adaro Indonesia increased production by more than 28% from the previous year to 34.4 million tonnes.
Through to today, Adaro Indonesia’s production & sales have kept a steady upward trend. Despite the challenges of Covid-19 Pandemic, 2021’s total production stood at 52,7 million tonnes.

The Change of Company’s Name
In the Extraordinary General Meeting of Shareholders (EGMS) held on 9th of February 2022, the shareholders approved the change of the Company’s name to PT Adaro Energy Indonesia Tbk. This change signifies the Company’s status as a national company and shows our commitment to contribute further to Indonesia.
For further information, click here.